Near-Death Experiences - Visits to the Other Side

Elements of the Near-Death Experience:

The near-death experience is a powerful spiritual experience of undetermined origin. It typically occurs when a person is close to death or in a situation of intense physical or psychological danger. Following are common features encountered when one journeys beyond life, as told by those who experienced them.

The order of these near-death experience elements is not rigid. For example, some people see the being of light before leaving their bodies and others see it after their spirits have gone through a tunnel. Not every person has or remembers and reports having had experienced each of the following characteristics.

Sense of peace and well-being

During a near-death experience a person is detached from physical life. The person feels comfortable. No pain or other unpleasant bodily sensations are felt. People report joy, warmth and comfort. Many say they feel secure, “as if they had come home.” People report feeling connected to a higher power and being part of a universe. They feel they have all knowledge.

Sue writes for all people irrespective of religious preference. Her writing is evocative and touching. She opens the doorway into a world of remembrance...a world we all may access any time we wish. 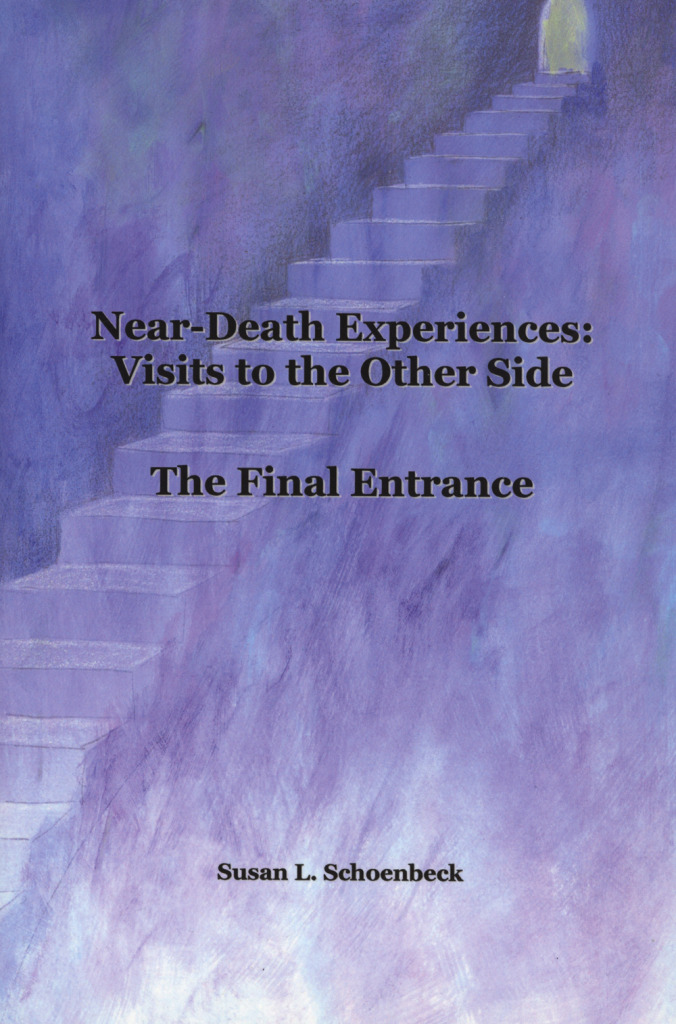 Spirit floating above the body

During a near-death event, people find themselves floating in another form above their bodies. They look down and see what is occurring. They can hear the words people in the immediate area are saying. They may see an image of themselves below as their bodies lay in clinical death. For example, car accident victims have seen others pulling their body from the wreckage. Heart attack victims have watched as passersby perform CPR on them. People tell stories of watching their own emergency surgery from a vantage point floating above the operating table. Often a humming or buzzing sound is heard as they soar in spirit forms outside their physical bodies.

People report moving very quickly through a cylinder-like tunnel. This tunnel is described as a dark and empty region. Children have said they were scared as they entered the tunnel, but this fear went away quickly. There is bright, enveloping light at the end of the tunnel. Sometimes the buzzing or humming described above continues in the tunnel.

Some people report that time either speeds up or slows down during the near-death event. It is not an uncomfortable change—merely different.

People meet a light they describe as golden. The light surrounds them. They say the light has a personality. This "being of light" is said to be loving and forgiving. Often near-death experiencers say they are encompassed by the light and feel like a child cradled in the warmth and protection of a parent’s arms. As Kubler-Ross (1991) verifies from her talks with the dying, God is not punishing. No one is an outcast.

When individuals enter the light, there is an instant playback of important events in their lives. Questions are asked. People who have gone over and come back tell of similar questions, including: What have you done with your life? Whom did you love? Who loved you the most? What events made you grow? How did you use your talents? Is anyone better off because of you? Were you a forgiving person? What is the worst thing you ever did? When were you hurt the most?

This life review is non-judgmental. It is conducted in a peaceful, loving manner by the "light being" and others gathered around.

A border is reached. Someone decides whether the person will remain or return. There are often others, frequently deceased family members or friends, present at this time. The dead are kind and welcoming. Although the person may want to stay, there is a push to return to the earthly world.

People do not always know why the decision is made for them to go back. Many times, the near-death experiencer is told that young children, friends or family members need the dying person to return to life. The person may be told to go back to help someone else or to accomplish a certain task. Other times the person is not told a reason but just directed to return.

Some people are called back into their bodies by someone in the room where they were experiencing clinical death. After having an NDE, a doctor said to me, “I was about to go out of the corner of the room, where I had been hovering above my body watching the emergency procedures being done, when I heard my wife call my name. Her pleading pulled me back to life.”

No one dies alone. People report that loving beings hovered around them at death. Many people tell of guides who helped them on their journeys. These individuals were kind and gentle. Often, persons report that a relative or close friend was the guide who met them and helped them understand what was happening. The guide was often identified as the one who told the person to return.

Some said their guides wore white robes. Other said they were bedecked in white with gold trim. Some death experiencers described the guides as formless. Guides often said they were messengers and helpers of a higher being.

All experiencers said the topography they encountered was luxuriously verdant. They reported delicate and shifting hues of color. The atmosphere reminded them of translucent clouds. People have come back talking of gardens, rolling hills, meadows, lush forests, lakes and music. A dying patient said to his nurse, "I pity you. The sky is not as blue for you as it is for me."

In a sudden burst, people find themselves “popped” back into their physical bodies. When this happens they start to once again sense the feelings of the physical body, such as pain and cold. People are sometimes angry when recovering from clinical death in the emergency room. They say they are mad that they are now in pain, whereas they had just experienced comfort in the life beyond.

Message: Do not fear death

The most outstanding outcome for persons who have experienced death is that they no longer fear it. Death, they say, is not the end as they had thought. Rather, death is the final entrance into a wonderfully spiritual world. Near-death experiencers often try to tell others that death is not the end of existence.